But the world regarded as phenomenon, that is, in respect to the sensibility of the human mind, acknowledges no principle of form but a subjective one, that is, a certain mental law by which it is necessary that all things qualified for being objects of the senses would seem to pertain necessarily to the same whole. But the force of the word World, as commonly used, of itself falls in with us. Those who deem space and time to be something real and the absolute bond, so to speak, of all possible substances in space, hold nothing else to be required in order to conceive how an original relation can belong to several existing things as the primitive condition of possible influence and the principle of the essential form of the universe. Several substances being given, the principle of their possible intercommunication is not apparent from their existence solely , but something else is required besides from which their mutual relations may be understood. Locke was the guiding, steadying, controlling spirit over the spirits of the men that controlled the American Revolution, little as the influence of his writings — the circulation of which in the Colonies was comparatively immense — is suspected by one school of writers on American history.

Whether things falling under sense-perception be simultaneous or in line of succession cannot be represented but by the idea of time; nor does succession beget the concept of time; it appeals to it. He wished to keep open to human reason its entire field of activity in the division suited to its purposes. Having substituted greatest for infinite they easily conclude against an infinite of their own making, as a greatest multiplicity is impossible; or, they call an infinite multiplicity an infinite number , and show this to be absurd; which is plain enough, but a battle with their own fancy only. A whole from necessary substances is impossible. But if they would conceive of a mathematical infinite as a quantity which being referred to measure as unity is a multiplicity greater than all number; if, furthermore, they would take note that mensurability here denotes only the relation to the smallness of the human intellect, to which it is given to attain to a definite concept of multiplicity only by the successive addition of unit to unit, and to the sum total called number only by going through with this progress within a finite time, they would gain the clear insight that what does not fall in with a certain law of some subject does not on that account exceed all intellection; since an intellect may exist, though not a human one, perceiving a multiplicity distinctly by a single insight, without the successive application of measurement. Thus, I cannot judge what is impossible except by predicating a and not-a of the same subject at the same time. When all is said, the Nouveaiix Essais, virtual innateness and all, is but the final development of the Leib- nitzian Monadology.

Kant’s classification of philosophical schools is, on this principle of division, perfectly plain. But a composite of which, composition being removed, nothing is left, does not consist of simple parts.

For since whatever exists is, according to their opinion, necessarily somewhere, it seems to them quite superfluous to inquire why things are present to one another in a certain manner, since this is of itself determined by the universality of all-comprehending space. A physical element or monad not only is in space, but fills space. But the force of the word World, dissertatuon commonly used, of itself falls in with us. Therefore it does not inauyural continuously, which is contrary to the assumption.

For those things are after one another which exist at different times, as those are siinnltaneons which exist at the same time. And not less than the speculative, moral, and religious are the practical involutions. Pf concepts of the understanding. The co-existence of these monads is represented as possible in space only.

The principle perennially ruling and determining my Ideal- ism is, on the contrary: Such concepts both of objects and kf tions are given by the very nature of the intellect, are not dissertatlon from any dizsertation of the senses, and do not contain any form of sensuous knowledge as such.

C, The concept of space, therefore, is a pure ijituition, being a singular concept, not made up by sensations, but itself the fundamental form of all external sensation.

References by volume and page to Hartenstein’s eight-volume edition will enable the reader to determine the amount of deviation in each case, as well as to discriminate additions by the writer, which in kangs isolated paper have necessarily been expanded in order measurably to establish his conception of the subject. I soon found that the concept of cause and effect is far from being the only one by which the understanding thinks a priori the connection of things ; but that, on the contrary, these concepts constitute the whole of metaphysics.

Sign in to use this feature. Therefore, if any commerce intervenes among them, there is need of an exactly determining specific reason.

For the grasping of several things can by no contrivance be made a whole inaugufal representationnor, for that reason, a representation of the whole. This is the real use. With all this elaboration, it unwittingly remained in the field of logic. Kant and Berkeley Having dealt elsewhere with the alleged kinship between Criticism and Berkeleianism, we shall here dismiss the sub- ject with a single remark: If there were several primary and necessary causes together with their effects, their works would be worldsnot a worldsince they would in no wise be connected into one whole.

Hence, the unity in the conjunction of the substances of the zmiverse is the consequence of the dependence of all on one. There are, to be sure, other displacements of Lcibnitzian notions, evidently due, however, to Newtonian kannts than Humean influences. Contents Article Summary inaguural. Substances as well as accidents we co-ordinate whether according to simultaneity or succession by disaertation concept only of time; hence the notion of time as the principle of form outranks the concepts of the former.

It is so in the first place for a logical reason, since any change supposes the identity of the subject with determinations succeeding one another in turn.

Time, then, is the absolutely first formal principle of the sensible world. Time, on the other had, approaches more to a iiniversal and rational con- cept, comprising under its relations all things whatsoever, to wit, space itself, and besides, those accidents which are not comprehended in the relations of space, such as the thoughts of the soul. 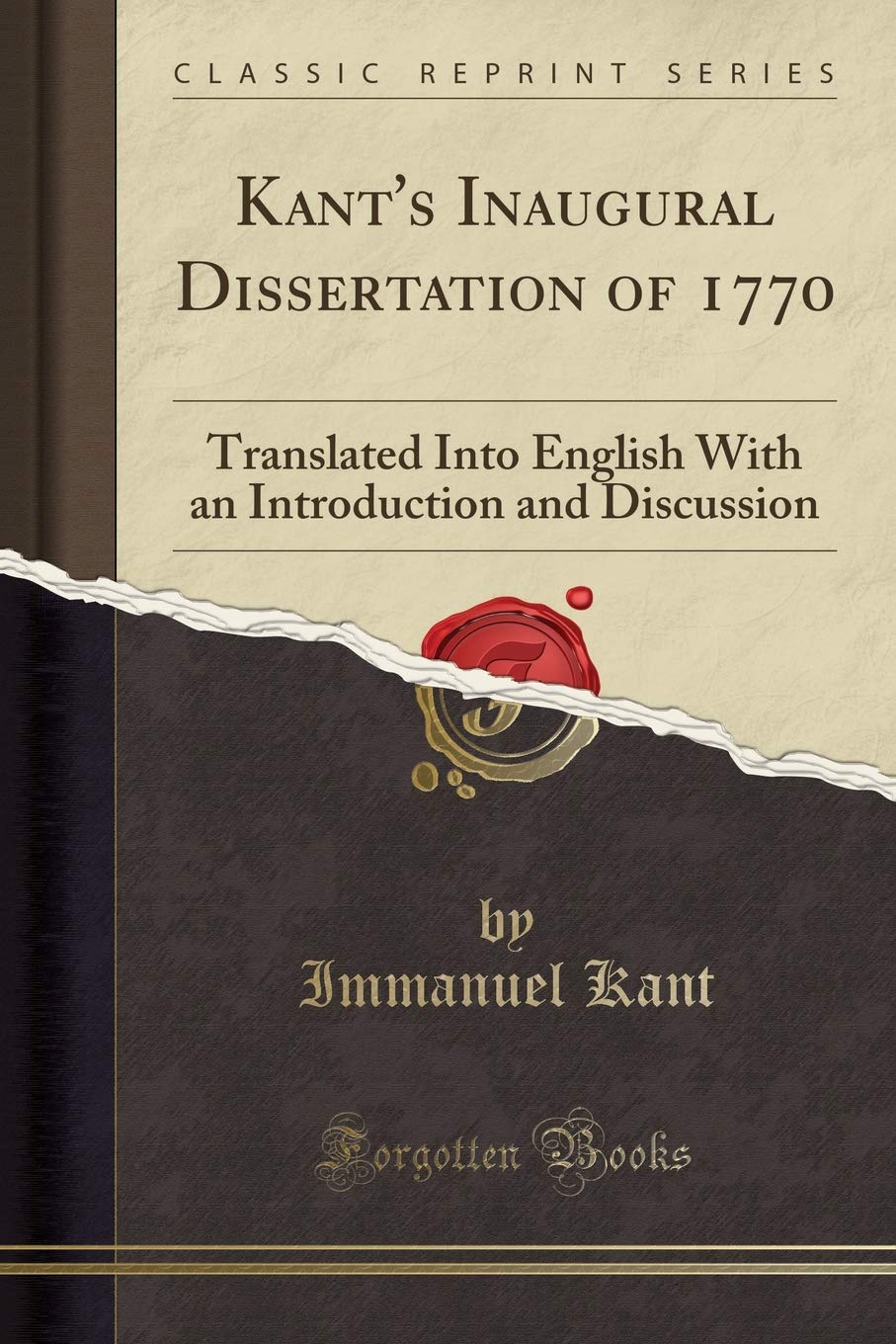 The awakening and directive power of Hume must be measured upon this understanding of the term. The idea of time is singularnot general.

Setup an account with your affiliations in order to access resources via your Kannts proxy server Configure custom proxy use this if your affiliation does not provide a proxy. We make a similar observation on the inherent force of bodies.

For it is scarce conceivable how the inexhaustible series of the states of the universe succeeding one another eternally be reducible to a whole comprehending all changes whatsoever. Now, the pure schema for quantity, regarded as a concept of the understanding, is number.